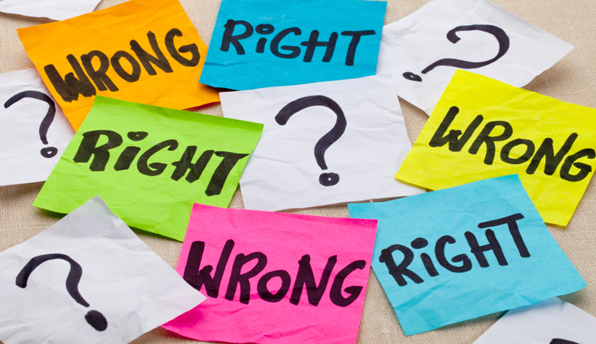 And not one that necessarily has tidy answers. At least for secular humanists.

But, as we all know, some sources of religious authority and tradition also offer some far more challenging positions with regard to many contemporary issues. This includes women’s rights and LGBT rights, among other things.

Those who want to hold onto this religious authority and tradition, while at the same time espousing contemporary values such as feminism and LGBT acceptance, sometimes have their work cut out for them. They may have a hard time explaining Bible passages such as, “Thou shalt not tolerate a sorceress” (Ex. 22:17) or “You shall not lie with a man as with a woman; it is an abomination” (Lev. 18:22).

Secular humanists don’t need to try to fit the square peg of traditional religious teaching into the round hole of contemporary values. But then, where does our morality come from as secular humanists?

In his Living the Secular Life, Phil Zuckerman explores this question:

The bald truth is, secular morality doesn’t have a simple, observable, obvious origin. Secular men and women don’t get their morals from some singular, readily citable source or supernatural deity. Rather, our morals are complex creations. They are the outcome of numerous forces, factors, and influences working simultaneously— many of which we aren’t even fully aware of, at least most of the time.

He cites findings from psychology, sociology, anthropology, criminology, and history as evidence that human morality is a complex question. Then, using a conversation with Gwen as a point of reference, he summarizes his findings:

…if I could offer a suggestion to Gwen, or any other secular individual out there who’d like a pat, simple answer to the question at hand, I’d offer the following: “I get my morals from the people who raised me, the culture within which I live, the kind of brain that I have, and the lessons I have learned from things I experience as I navigate life.”

At the risk of oversimplifying the issue, I’m prepared to offer an even more succinct answer: as secular humanists, our morality comes from us. We are the ones who know and decide what is right and what is wrong. And since we don’t accept the validity of accounts of supernatural revelation, we acknowledge that this is where theists’ morality comes from too.