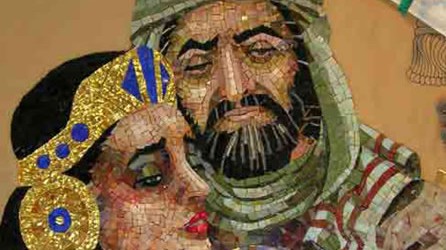 Many Jews suspect that it was because the hero of the Purim story would not bow to any man–only to God.

Clearly, whoever made that rule didn’t tell the other patriarchs and matriarchs that bowing to other people was forbidden:

When Joseph came home, they brought into the house to him the present which was in their hand and bowed to the ground before him. (Genesis 43:26-28)

“Judah, your brothers shall praise you; Your hand shall be on the neck of your enemies; Your father’s sons shall bow down to you.” (Genesis 49:8)

Then Moses went out to meet his father-in-law, and he bowed down and kissed him…. (Exodus 18:7)

And when Saul looked behind him, David bowed with his face to the ground and prostrated himself. (1 Samuel 24:8)

Then she fell on her face, bowing to the ground and said to him, “Why have I found favor in your sight that you should take notice of me, since I am a foreigner?” (Ruth 2:10)

The real reason has to do with Haman’s lineage. In the Book of Esther Haman is called “Haman the Agagite.” He’s understood to be the seed of Amalek, the group that attacked the Israelites in the desert.

In this day and age we like to believe that it doesn’t matter who your parents were, or where they came from, or what they did. For one example, we may know about Henry Ford’s despicable behavior in the 1920’s, but that doesn’t mean we hold his children and grandchildren responsible for their ancestor’s actions–in fact, we honor them for their contributions to the Jewish community. In this day and age, we tend to believe that the circumstances of your birth shouldn’t dictate what you become, or how you are viewed by others.

But even if we disagree with Mordecai’s principles, perhaps we can admire him for standing on principle. A contemporary equivalent might be choosing not to say the Pledge of Allegiance. And another example comes to mind that may be a bit more a propos.

I don’t often attend traditional Jewish worship services anymore. But I grew up in that world and I remember when people started bowing during the Bar’chu and the Amidah, and also towards the end with the words Va’anachnu korim u’mishtachavim u’modim. I was always pretty uncomfortable with this and, needless to say, on that rare occasion now when I find myself in a Reform or Conservative service now, I don’t bow.

So you might say, I’m following Mordecai’s example–except I take it one step further.